Ultrasound: The Leading Technology During Pregnancy

The Science Behind Ultrasound 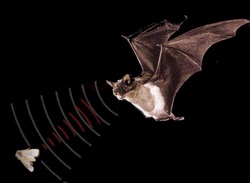 The ultrasound works similarly to a bat
Those who know what an ultrasound is don't actually know how the the image is produced on the screen. The machine mostly works through high frequency sound waves and their echos that they produce. This is actually similar to a nocturnal animal like bats that use sound waves to navigate themselves through their surroundings. Humans have integrated this concept into many pieces of technology such as sonar that the navy uses and sonograms. There is a procedure as to how an ultrasound machine produces images on the screen:

1. First the machine emits anywhere from 1-5 megahertz of sounds pulses into the patient's body from the transducer probe on the machine.
2.  The sound waves emitted hit a boundary tissue (between fluid and soft tissue, soft tissue and bone).
3. Those sound waves bounce back to the transducer probe located within the ultrasound machine.
4. The machine eventually calculates the distance from the probe to the boundary between the tissue and the bone by using the speed of sound in the tissue, therefore causing the echoes to return
5. The machine creates an image based on the distance .

The Parts of an Ultrasound Machine: 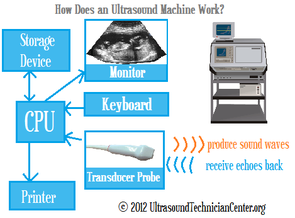 Computer Processor Unit (C.P.U) - does the calculations and results when the transducer is performing 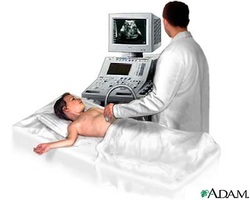 In order to perform an ultrasound, a sonographer has materials that are hard to obtain. These materials are a jelly-like substance and a transducer probe from the ultrasound machine.There aren't many steps to performing an ultrasound which is why it so easy to get an ultrasound these days.

Step 1: The transducer probe on the machine has to be in contact with the skin for the sounds waves to be emitted into the patient's body.

Step 2:  A jelly-like substance must be applied to the skin so that the transmission of sound waves are improved.

Step 3: The final part of the procedure is that the transducer probe is moved over to the part of the skin that is being examined .
Powered by